Really we like to think of ourselves as a family. There are many members of the same family who work for us, and we value each of our families and hope that hat helps us to value your family too.

The business is in it's 6th generation of being owned and run by the Clutterbuck's, originally from Eastington but moving to Cam and Dursley in 1955, under the 4th generation ownership of Leslie Wilfred Clutterbuck giving rise to the company name: L.W.Clutterbuck.

We have 5 members of staff who conduct funerals: Leigh Simmonds, Brooke Adam, Jeremy Clutterbuck, Andrew Frost and Jamie Lack (from left to right). 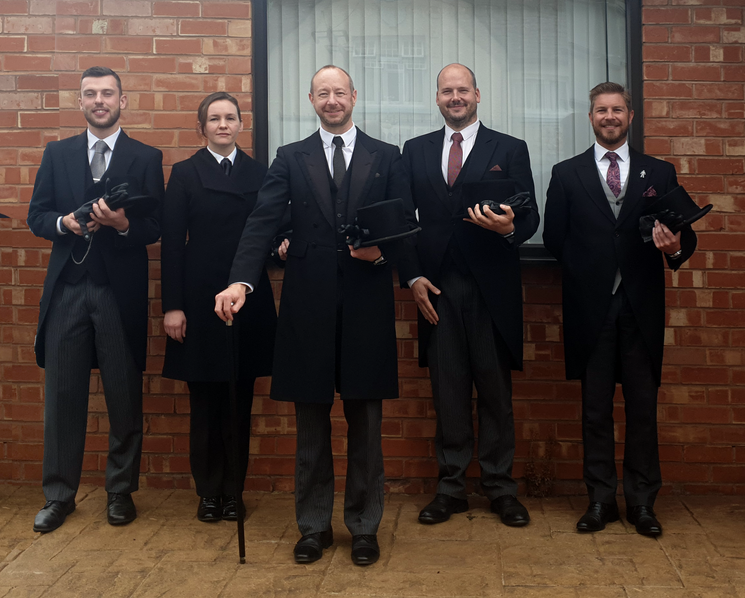 Jeremy grew up in Cam, went to school at Cam Hopton and Rednock Secondary School and then went on to study Matehmatics and Computer Science at the University of Durham. After 5 years as a Civil Servant working for the Ministry of Defence he returned to take over running the business from his father, Ken Clutterbuck, in 2001.

Andrew and Jamie went to school together, first Everlands and then again Rednock School. Andrew has a Masters Degree in Death, Culture and Religion and a Foundation Degree in Funeral Service.  Andrew joined the company in 2005.

Jamie joined the company in 2010. Jamie and Jeremy have been seen on the stage performing in a local choir, Camtabile and performing in the annual Cam Caberet.

Brooke moved to Cam from London and has spent some time in Germany. Brooke joined L.W.Clutterbuck in 2015. She is an extremely talented crafter.

Leigh joined the company in 2018 as a bearer but his talents were quickly spotted as being someone capable of a career in Funeral Directing. Leigh enjoys playing football.

These are the three things I hope to offer the people who have asked me to support them in creating a funeral for someone they have lost.  I have been doing this in the South West of England for over seventeen years.

My previous working life was a combination of Nursery nursing, Adult nursing and Motherhood.  All those occupations offer you many of the skills that you need to support people to create the funeral they hope for. I also have an MSc from the Centre for Death and Society at the University of Bath and am now a visiting research fellow there.

We start by talking about the person who has died.  Slowly it will become clear how people would like the funeral to be and feel.  I then work on the structure of the funeral, write it and eventually deliver it at the venue that people have chosen.

I am a Quaker. This is only relevant as in my work I try to create funerals that reflect how the person who has died made sense of the world this may mean we have religious content or none.  My aim is that the ceremony is true to the person who has died and to those present at the funeral.  With Time, attention and listening, the right balance for everyone can normally be found.

During the time spent creating a funeral I support the diversity of my customers, I try to be creative and innovative whether the funeral is a simple honouring or large and complex ceremony and give them as much contact and input as they need.

To love and to be loved is how we continue

These words have always been important to me in my practice as a funeral celebrant.  We have either been taught to love by those we have lost and so take that into our own lives and pass their gift on or possibly we have learnt to love all by ourselves and so know how important it is to pass love on.

Funerals and their planning is always complex. It can be both wonderful and challenging.  My role is to help you through the process of creating a funeral that is right and fulfilling for you, the memory of the person who had died and those attending.

Behind every great team... is an even greater admin team! We are supported in our work by Ruth Evans-Price who deals with all things financial, and you will see on the reception desk Tuesday - Thursday and is in turn supported by Helen Phillips, Dawn Clutterbuck who collates and sends all the donations in memoriam and Linda Downend who oversees our HR.